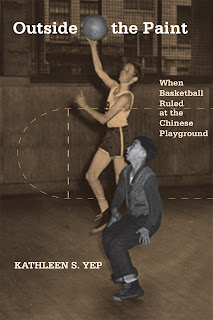 Kathleen Yep, author of Outside the Paint: When Basketball Ruled at the Chinese Playground, has an insightful post at North Philly Notes about Jeremy Lin mania. I have to admit that I'm not a basketball follower, so the constant headlines about Lin at first confused me ("Jenny Lind mania is back?! Fantastic!"), but the more I've learned, the more interesting the whole phenomenon has become for me in understanding the nature and history of sports audiencing. Fan studies has done a pretty good job of exploring the complexities of gender in the history of popular culture participation, from feminist theories of spectatorship and reading to male-bonding over Elvis, but race and ethnicity in fan history remain only superficially understood (see the recent special issue of Transformative Works and Cultures, Vol. 8, for analysis on the issue). Yep, drawing on her research of a fan community that has a long history but is still little known, points out that,


...Similar to today’s frenzy over Jeremy Lin, there were multiple currents of consumption in the late 1930s from not only the mostly non-Asian American spectators but also the Chinese American communities on the basketball tour. The invisible and marginalized Chinese Americans in the 1930s marveled at the visibility of players who looked like them. In 2012, Lin’s transcendence into a popular culture hero validates the vast network of Asian American players and basketball leagues that have thrived for over one hundred years.

In her post, Yep goes on to ask some questions that might make some fans uncomfortable but are nevertheless crucial in understanding not only the fandom for Lin but also fan participation in American sports in general: "How does the sports-industrial complex simultaneously circulate colorblind and hyperracialized rhetoric about African American, Chinese American, and white players? How are these circulations similar and different for the various racial groups yet part of a similar mechanism?"
Posted by Daniel Cavicchi at 5:18 PM

Daniel Cavicchi
Professor of American Studies and Dean of Liberal Arts, Rhode Island School of Design. This page addresses one of my primary research interests: historical reception, especially the development of what is currently called "fandom." Audiences are typically thought of as secondary, unremarkable, and anonymous in American cultural history. What might happen if we value "audiencing" and move it to the center of how we think about the development of literature, theater, music, movies, sports, and other forms of popular culture?

Listening and Longing: Music Lovers in the Age of Barnum (Wesleyan U. Pr., 2011)

Listening and Longing News and Reviews

Tramps Like Us: Music and Meaning Among Springsteen Fans (Oxford U. Pr., 1998)