What is this audience doing? The answer is after the jump. 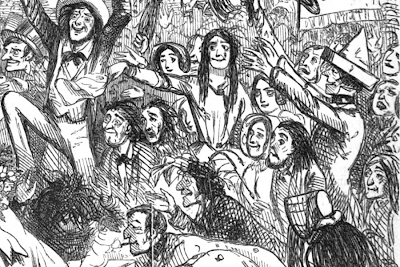 They are celebrating the arrival of opera star Jenny Lind in New York in 1850.

Actually, this is a detail view from satiric image that first appeared in London's Punch (October 5, 1850). It was intended to mock the outrageous public excitement over Jenny Lind's national tour and emphasize Americans as country bumpkins, lacking refinement. (The stereotype of "Yankee Doodle" survived among the British long after the Seven Years War!). Even in the United States, cartoons that negatively depicted the behavior of working class, immigrant, and rural audiences--often by equating them with unruly mobs--became more common in newspapers after the Civil War, as genteel reformers sought to make contrasts between older forms of popular audiencing and what they perceived as their own more reverent engagement with art and culture. 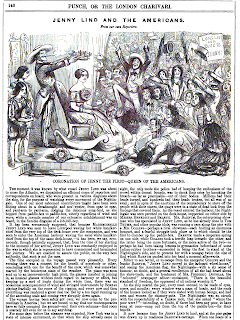 I think I'm going to make "Name That Audience" a regular feature of this blog--look for it on Sundays.
Posted by Daniel Cavicchi at 8:02 AM

Daniel Cavicchi
Professor of American Studies and Dean of Liberal Arts, Rhode Island School of Design. This page addresses one of my primary research interests: historical reception, especially the development of what is currently called "fandom." Audiences are typically thought of as secondary, unremarkable, and anonymous in American cultural history. What might happen if we value "audiencing" and move it to the center of how we think about the development of literature, theater, music, movies, sports, and other forms of popular culture?

Listening and Longing: Music Lovers in the Age of Barnum (Wesleyan U. Pr., 2011)

Listening and Longing News and Reviews

Tramps Like Us: Music and Meaning Among Springsteen Fans (Oxford U. Pr., 1998)